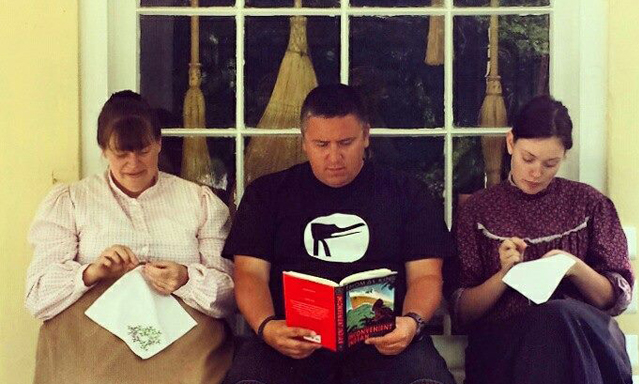 Join us for a free public screening of COLONIZATION ROAD (2016, 47minutes)

COLONIZATION ROAD unearths the history of the Public Lands Act of 1853 — its impact on First Nations, treaties, land and the expansion of “Canadian” settlement. Anishinaabe comedian and activist Ryan McMahon follows a few roads, one in his own home town of Fort Frances, Ontario, where the main drag is still called Colonization Road. Ryan meets up with a number of people along the way, exploring the state of relationships, settlers in solidarity and what it means to “decolonize.”

Halifax’s Poet Laureate, Rebecca Thomas, will speak, perform, and join us for a facilitated discussion following the film.

Rebecca Thomas is a Mi’kmaw woman living in Dartmouth Nova Scotia. She is the daughter of a residential school survivor whose family is rooted in Lennox Island First Nation, Prince Edward Island. Rebecca is outspoken when it comes to confronting Aboriginal stereotypes, as well as educating her colleagues and the general public about cultural safety and integrity. Through her work as Indigenous Supports and Student Advisor at the Nova Scotia Community College, and also as a Slam Poet, Rebecca encourages people to think before they speak. Having been named HRM’s most recent Poet Laureate and the first Indigenous person to hold this role, most of her work focuses on the relationships between Canada’s First Peoples, their relationship with the federal government, and how First Nations’ people are perceived publicly. Rebecca is on a life long journey to promote understanding and empathy for Indigenous people and marginalized communities.

The Radical Imagination Project, in partnership with the Cinema Politica Network and the Halifax Public Libraries is pleased to bring you this series of documentary films to stir the soul and evoke the struggle for a better society. Please see our other events for more information, or visit http://radicalimagination.org/