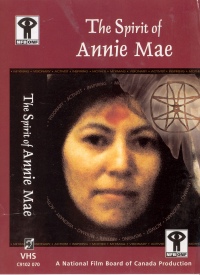 In 1975, Annie Mae Pictou Aquash, a 30-year-old Nova Scotia born-Mi’kmaw, was shot dead, execution style, on a desolate road in South Dakota. Nearly three decades later the crime remains a mystery. Aquash was highly placed in the American Indian Movement (AIM), a radical First Nations organization that took up arms in the 1970s to fight for the rights of their people. The Spirit of Annie Mae is the story of Aquash’s remarkable life and her brutal murder. It is a moving tribute from the women who were closest to her: the two daughters who fled with their mother when she hid from the FBI; the young women she inspired to embrace Native culture; and the other activists, including Buffy Sainte-Marie and investigative journalist Minnie Two Shoes, who stood in solidarity with her. All are still trying to understand why she met such a violent death. Follow them on their journey as they celebrate the life of a woman who inspired a generation of First Nations people.

Catherine Martin is the Nancy’s Chair in Women’s Studies at Mount Saint Vincent University. A member of the Millbrook First Nation in Truro, Nova Scotia, Catherine is an independent film producer, director, writer, facilitator, communications consultant, community activist, teacher, drummer, and the first woman Mi’kmaw filmmaker from the Atlantic region. Catherine’s many award-winning documentaries tell the stories of her nation and include the animation film Little Boy Who Lived with Muini’skw (2004), the NFB film The Spirit of Annie Mae (2002), and Spirit Wind(2000).

The Radical Imagination Project is pleased to partner with Cinema Politica and the Halifax Central Library to bring you powerful and inspiring documentaries about social justice on alternating Monday nights. For more information and our schedule, visit our website.