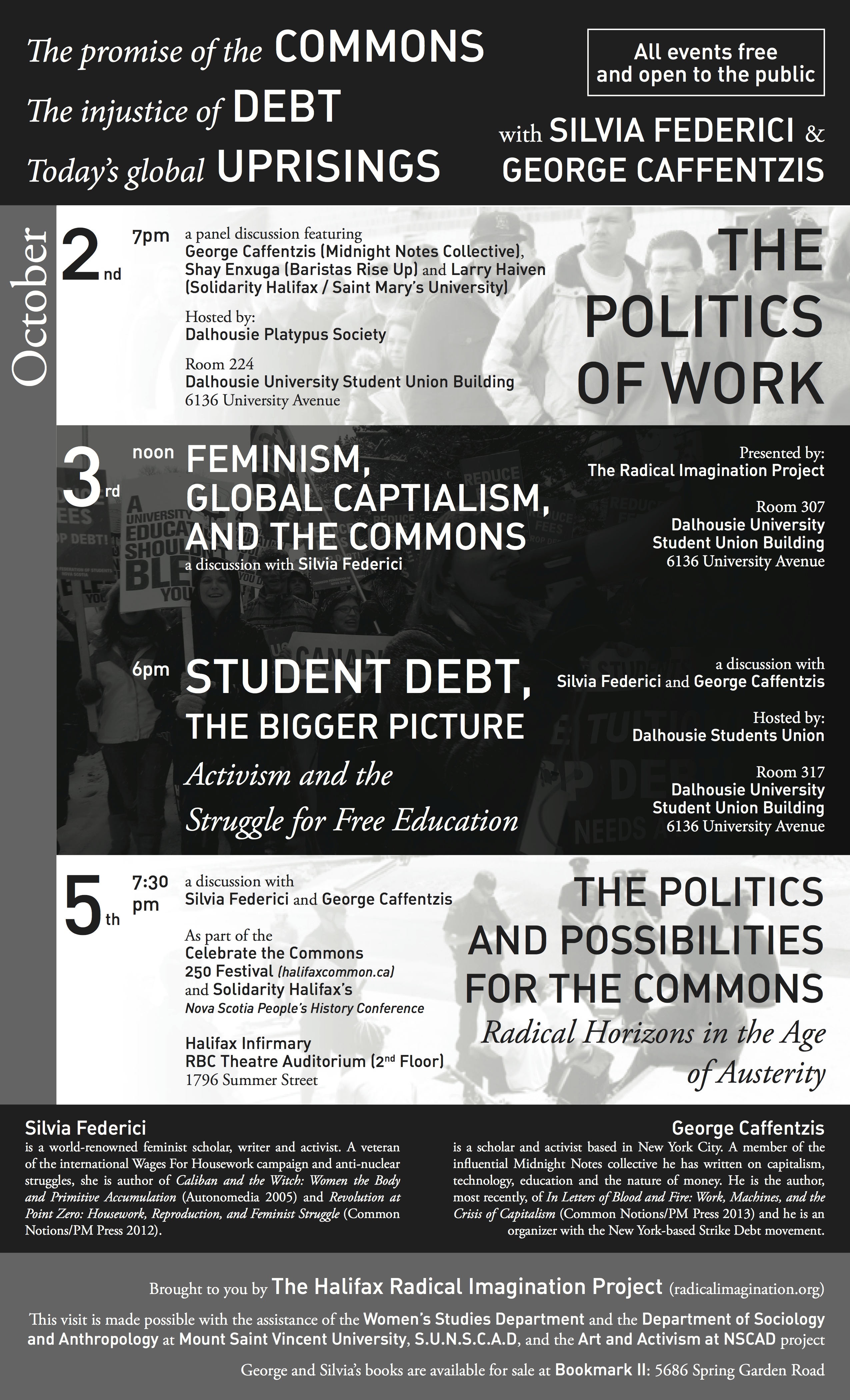 THE PROMISE OF THE COMMONS, THE INJUSTICE OF DEBT, TODAY’S GLOBAL UPRISINGS

Silvia Federici is a world-renowned feminist scholar, writer and activist. A veteran of the international Wages For Housework campaign and anti-nuclear struggles, she is author of Caliban and the Witch: Women the Body and Primitive Accumulation (Autonomedia 2005) and Revolution at Point Zero: Housework, Reproduction, and Feminist Struggle (Common Notions/PM Press 2012).
More information: http://commonnotions.org/authors-2/silvia-federici/

George Caffentzis is a scholar and activist based in New York City. A member of the influential Midnight Notes collective he has written on capitalism, technology, education and the nature of money. He is the author, most recently, of In Letters of Blood and Fire: Work, Machines, and the Crisis of Capitalism (Common Notions/PM Press 2013) and he is an organizer with the New York-based Strike Debt movement.
More information: http://commonnotions.org/authors-2/george-caffentzis/

Out of the ashes of Occupy Wall Street, a new generation of activism has emerged to contest the power of debt over our lives. Is student debt a legitimate “investment” or is it a form of economic coercion that unfairly constricts our individual and collective horizons? In this presentation Silvia Federici and George Caffentzis, New York-based anti-debt organizers and scholars, share their experiences and insights into student debt and the role of the university in capitalist society.

7:30pm – Federici and Caffentzis speak on a panel THE POLITICS AND POSSIBILITIES FOR THECOMMONS: RADICAL HORIZONS IN THE AGE OF AUSTERITY

George and Silvia’s visit has been made possible with the assistance of the departments of Women’s Studies and Sociology and Anthropology at Mount Saint Vincent University, and by the Student Union and the Art and Activism Project at the Nova Scotia College of Art and Design.