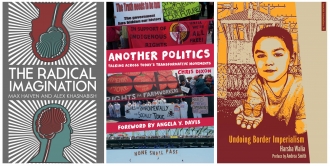 Join us at the People’s Social Forum in Ottawa for a joint book launch and discussion with the authors!

In a moment of austerity, violence, and crisis, this panel will discuss radical movements as producers of new visions, ideas, and practices, all animated by the radical imagination. What liberatory paths do anti-colonial, anti-capitalist, anti-oppressive, and anti-authoritarian struggles illuminate? What important lessons do such struggles offer? And what can be done today to catalyze the radical imagination more broadly?